Mapping Seattle and the Forgotten War

Earlier this week I posted a series of photographs and the story of a troop transport arriving in Seattle on August 2, 1951. This article is a data accompaniment to that. 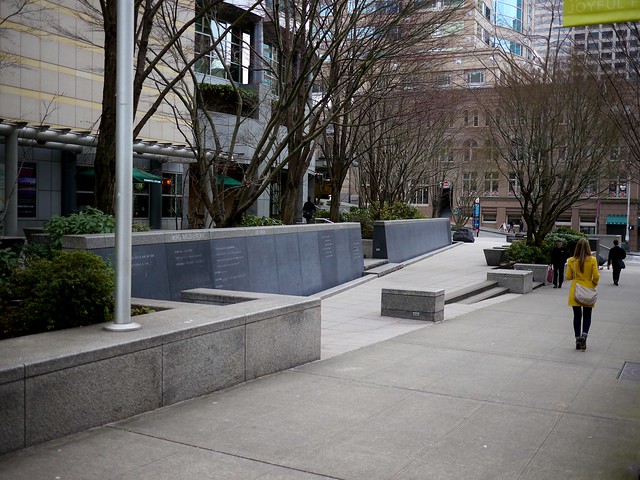 In downtown Seattle there is an understated memorial to every Washington soldier that has died at war. It’s on the east side of Second Avenue at University Street, alongside Benaroya Hall. The Korean War is often referred to as the “Forgotten War” because it came so soon after World War Two, and the Vietnam War would later eclipse it in public memory. After posting the photos of the transport and telling the whimsical story of its arrival in Seattle, I decided I should tell the other side of the tale through data. I wouldn’t want to have to transcribe the names from the wall of every killed or missing soldier. Luckily there are many lists of the Korean War dead.

The best I found is the National Archives’ “Fielded Search” of the Casualty File database, which allows complex queries. While browsing other lists I noticed that many of King County’s dead were listed with “Unknown” city, so I queried the Casualty File twice: once for Seattle, and once for Unknown. Then I spent about ten hours looking the names up in the historic Seattle Times; Ancestry.com’s military files (eg, headstone orders), city directories, and family trees; and in Washington State’s Digital Archives. That list of sources is in order of importance.

Unfortunately there were a number of names that I could not find. And perplexingly there were another handful that the best information I could find was that they were not associated with King County at all, except maybe they registered here.

* I’ve written an article about one of those men, Lloyd Sullivan.

In the end I arrived at 74 addressed names. Here’s that map.

And here is a zip of the KML file for the map. Feel free to use it however you like. I would appreciate knowing how you put it to use, though.

And finally, here are the lists of names that I could not track down details, and then the ones that I determined were not from King County. Please contact me with any further information about these men and I will update the map.

Names I couldn’t track down:

Names I found but information indicates that they were only briefly associated with Seattle, if at all:

Reading through any 100 newspaper accounts of deaths would be difficult. These were particularly painful. I wonder if I’ll ever shake the grainy reproduction of one particular photograph. Two young boys cradle the portrait of their father, whose body was recovered two years after he went missing. One has never known him, and the other must have only the faintest of memories. Their mother, who steeled her heart long ago, asks the public to spare her no sympathy.