To install clocks in the Seattle street right-of-way after 1901, the Seattle Board of Public Works required blueprint plans or photographs to be submitted. So far, four blueprints have been discovered in Seattle’s city records. Three originals are in the Seattle Department of Transportation street use permit files, and one is reproduced on a microfiche in the city archives.

They are presented here from oldest to newest.

First, the microfiche plans of the clock installed for L. W. Suter by Joseph Mayer in 1906. This clock was an E. Howard four-dial. This is included in Comptroller File 30017, a letter from Mayer requesting permission to install it in front of the Colman Buiding, where Mayer & Bros’ factory was located at the time. Comptroller File 30180 clarifies that the clock was actually sold to L. W. Suter and installed at his store at 713 First Avenue. 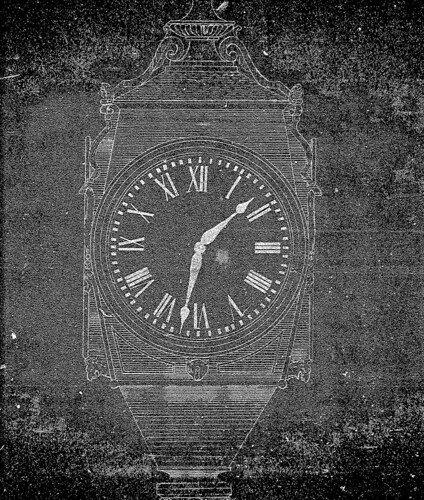 Chronologically next is the Mayer big 4-dial, more than nineteen feet high. The blueprint is dated June 27, 1912. This document and the next two were in files at the SDOT street use permit desk as of 2009. This plan was apparently made for the installation of B. L. Gates’ clock at 1326 2nd Avenue. It was kept on file for other clocks of the same design. Another was installed in Tacoma and moved to Cicero, New York at the Penn-Cann Mall. The mall has been turned into a large auto dealership called Drivers Village.

Dated March 13, 1913, the blueprints for a smaller four dial Joseph Mayer designed clock are also on file at SDOT. This generally matches the design of Ben Bridge and other clocks, although Bridge’s clock was installed later in 1928.

The last blueprints were also designed by Joseph Mayer, a two dial clock dated March 29, 1913. Mayer designed a large number of two dials, though they changed slowly over time. 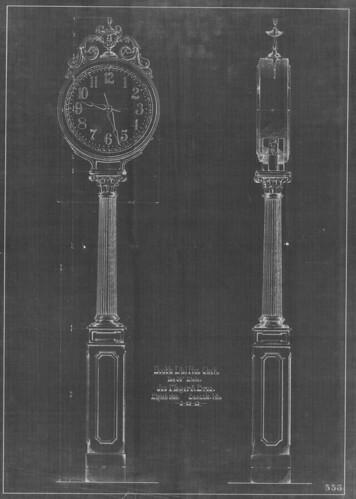 I have written a number of articles on Seattle’s street clocks, listed below. My friend Paul Middents is working on a manuscript for a book on Joseph Mayer’s work, which you can glimpse at here.